Webinar: Kick-Start – Making the Most of an Internship (Hosted by NETS at UCSD) 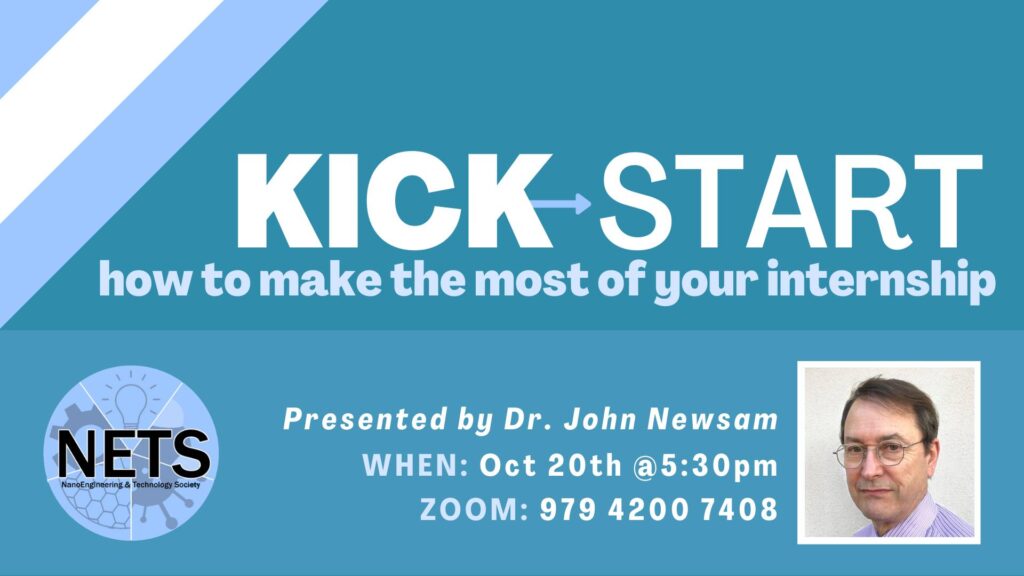 NETS presents an industry speaker event to help you navigate your future internships and make the most out of your career potential. Our keynote speaker, Dr. John Newsam, is a materials scientist, business innovator and entrepreneur, and adjunct professor at UC San Diego. As a materials scientist, Newsam has authored over 170 scientific publications, on topics such as zeolites, crystallography, materials simulation and high throughput experimentation, and is an inventor on 9 issued US patents; he has lectured extensively, and been recognized by several awards.
Dr. John Newsam will be discussing his book “Kick-Start - Realizing Best Benefits from a Science, Technical or Business Internship” and we will be raffling off a FREE copy of this book, so make sure to RSVP to enter the raffle!
WHEN: Tuesday, October 20th @8:30pm ET

John M. Newsam has been CEO of Tioga Research since launch in 2011, having served in corporate executive roles since 1996. He was CSO of Molecular Simulations Inc. (now Biovia – from 1996, acquired by Pharmacopeia in 1998), Office of the President for hte Aktiengesellschaft (from 2000), CEO of fqubed (from 2002), CEO of Bio4Front, and Senior VP of Business Development for Nuvo Research (from 2009, CA:NRI). Dr. Newsam has been the founder or a co-founder of more than 10 companies: Thirona Bio (2019), Lipidio Therapeutics (2019), Permeatus (2017), DMK Pharmaceuticals (2016), Tioga Research (2011, acquired by Encube Ethicals in 2019), Bio4Front (2008), Windhover Ventures (2003), fqubed (2002, acquired by Nuvo Research in 2005), Integrated Discovery Sciences (2001, acquired by Bio and Gene in 2005), hte AG (1999, acquired by BASF in 2008), FreedomVoice Systems (1996, acquired by GoDaddy in 2016). Dr. Newsam’s venture capital experience includes serving as a member of the advisory council of the Green Gateway Fund, and previously as a Venture Partner at NGEN Partners and as advisor to the Scottish early stage venture fund ITI Life Sciences. Dr. Newsam has contributed scientific and strategic consulting to several US Fortune500 companies, to early phase biotech and materials companies in the US, UK, and Korea, and to government institutions such as IFP Energies Nouvelles. He has served on numerous academic advisory committees.